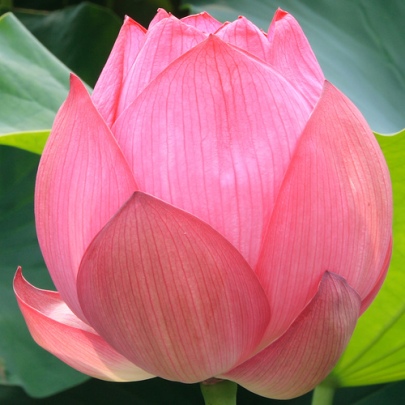 And the day came when

the risk to remain

tight in a bud

The Lotus Sutra is the Buddha’s most important teaching. This sutra lies at the heart of Buddhism and it could be said the essence of Buddhism is crystallized within this most sacred scripture.

The joy and the power of reciting passages from the Lotus Sutra is inexplicable. Some of the passages I translated and incorporated in my short story Feathers In A Jar. The beauty of a life well lived and the potential to blossom lies within each and every moment.

Generally speaking Buddhists do not worship Buddha. The Buddha himself said that he was not a god nor should he be worshiped. Throughout his teachings he expressed himself as Teacher, Guiding Light, Vessel, Messenger. There is nothing the Buddha did, or attained – including Enlightenment – that we cannot do or attain for ourselves, just as we are.

Like the lotus flower that blossoms in the muddy swamp, so too can ordinary human beings attain Enlightenment.

So whats up with some Buddhists bowing to statues of the Buddha? Looks like worship what with all the flower offerings, incense and whatsnot. Here’s the deal on that:

A statue of the Buddha with its hands rested gently in its lap and its compassionate smile reminds us to strive to develop peace and love within ourselves. The perfume of incense reminds us of the pervading influence of virtue, the lamp reminds us of light of knowledge and the flowers which soon fade and die, reminds us of impermanence. When we bow, we show respect and we express our gratitude to the Buddha for what his teachings have given us.

I don’t happen to have a statue of the Buddha, I’m not that kind of Buddhist. However when I get travel again, and happen upon a Buddhist temple with a statue in residence, I will pay my respects accordingly. 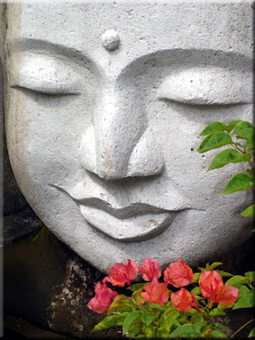 Like Christianity, Buddhism has many branches and sects. I know there is major split in Christianity – there is Catholicism and there is Protestantism. In Buddhism there is something sort of like that. The teachings of the Buddha are divided into two parts, Hinayana and Mahayana. The former are his earlier teachings, and the latter are his later teachings. The form of Buddhism I practice is a part of the Mahayana teachings.

This wonderful lady who would host Buddhist study and prayer groups at her home had this wonderful poem hanging on her wall. I know she was a single mom, raising her young daughter by herself. I can’t remember what that poem said word for word, but I think it boiled down to basically this:

The Buddha runs down the stairs laughing

and runs into the arms the Buddha

who hugs her tight.

That is how mother and daughter would greet each other every morning. I’ll never forget how I felt when I really started to think about that. This ordinary woman who was extraordinary in those ways that people are when they raise children, understood the essence of the teachings. The teachings we all studied as she opened her home and her heart to fellow travelers along the Way.

The Lotus Sutra affirms that all people, regardless of gender, capacity or social standing, inherently possess the qualities of a Buddha, and are therefore equally worthy of the utmost respect.

My Gift to you today is the only Buddhist chant you’ll ever need IMO ;) Click HERE to open up youtube and listen and chant along if you like:

A one hour recording of a group of Buddhists chanting daimoku together.

We ordinary people can see neither our own eyelashes, which are so close, nor the heavens in the distance. Likewise, we do not see that the Buddha exists in our own hearts.

~The Writings of Nichiren Daishonin, 1137