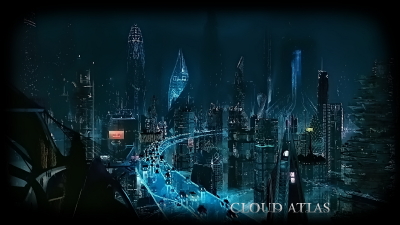 I finally got to see Cloud Atlas when it came up on my Netflix DVD queue. I was looking forward to seeing it for a couple reasons. Firstly, I’m all scifi/metaphysical and I’ll sample anything that plays around with those genres. And also, I’d heard it was a “flop” and that there were some problems racially speaking.

So naturally I had to find out for myself.

First of all —> SPOILER ALERT SPOILER ALERT <— so ditch out now while you can if you haven’t seen the movie and want to sans spoilers.

I was happy about the scifi. The tech in the future scenes was beautiful and just how I wish we were living right now. It was taking the virtual out of VR and making it part of every day reality. Loved It. The vehicles were awesome and the fight scenes were on point. Delish.

I was ok with the basic overall concept that I interpreted to mean a discourse on aspects of reincarnation. And by that I mean that the essence of YOU lives forever and never dies. Over the ages you will experience incarnations – different bodies, different lives – as YOU travel through space and time via rebirth.

As a Buddhist and also as a Quantum Activist you know I was down.

Because of that, I understood what they were trying to do when they had their race fail moments. But I kept being yanked out of the movie whenever those horrifying “Asian eyes” prosthesis whatever thingers showed up on my screen. I won’t even mention the “Asian eyebrows” either.

I found out that there were a lot of people standing up for the creator’s race fails as I went about my research for this post. As I said, I do understand what they were trying to do, and I’m behind them on that, but in the execution of their idea and concept, I’m going to have to give them a failing grade.

We have already seen in scifi, from X-files to Star Trek the subtle ways to portray one being, entity or object inhabiting the body or frame of another. You can show it in the reflection in a mirror or a reflective surface. You can show it by switching back and forth between POV of the character and the audience  – like how they did on Caprica when Zoe was inside the robot body.

Those are just the few examples off the top of my head. You would think the concept crew on a million dollar movie would have managed to come up and utilize those and maybe any other ways to express who was who over time. I find the decision to go with the “Asian eyes” lazy and so typical of Hollywood.

I have scoured the web and found not one picture or screencap of Keith David in future Seoul wearing his “Asian eyes”. You should wonder why that is. Because having a Black guy be an Asian guy was the moment where everyone should have realized that the “Asian eyes” thing was problematic, and not the way to go. In truth, they should have realized it from the second the idea came out of whoever’s mouth during a production meeting, but ok whatevs.

I mean really. Especially in those scenes in future Seoul where there are actual Asians everywhere on the set, and nobody noticed that side by side those fake eyes were SO NOT EVEN REAL LOOKING and in fact, jarring, scary and made the actors look like alien freaks.

Hollywood has portrayed Asians as alien looking freaks since forever, so yeah, angry yes, but not really surprised nobody in production spoke up or said anything. It was status quo continuing on as it always has. 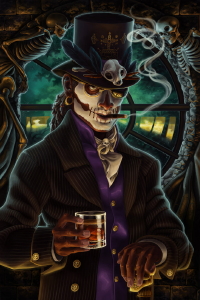 And don’t think I didn’t taste a lot of Baron Samedi flavor in the character of Old Georgie. Which – culturally speaking – could have have easily been played by David Gyasi, giving him an additional role in the movie other than a stowaway slave and screen blips on the other two roles he had. This need to whitewash everything drives me nuts. The culture appropriation, and the white guys getting all the roles notwithstanding.

CLICK HERE to see visuals on who played who in Cloud Atlas.

There are some interesting omissions on that who’s who chart, but not surprising ones. It was also hard to find pictures of certain characters – of color – and representations of their roles in the film, including Keith David, who is a major actor, and played not an insignificant part(s) of the movie. Business as usual.

What I also saw blip by on my screen were the visuals of Black People In The Future. They were all shown standing on that rescue boat for about 3 seconds before moving on to something else.

It was like they were acknowledging that ok Halle Berry is Black, so the woman she is playing is Black, so “her people” the precients, or her familial section of the precients are Black, so we’ll give a lil nod and pop them on the screen for a sec, ok diversity duty DONE.

If you’ve read my Why I Love Scandal page here on my blog you know how I ABSOLUTELY HATE THE SCREEN BLIP when it comes to Black bodies and faces. I’d rather they just don’t bother, than hurt me with that screen blip madness.

Ok, I’m calm now. But actually I’m not. I never get to be calm. But I’ll wrap up this post with my grades for the movie Cloud Atlas.

A+ on the scifi visuals and tech.

B for tackling the concept of reincarnation, souls never die, and attempting to put what seems like a very arresting book into film format.

F+ on the race fails, and being lazy, and falling back on typical (racist) Hollywood methods to make movie magic. Fail Fail Fail.

Keith David, Halle Berry, Tom Hanks, David Gyasi and Bae Doona kicked major butt in this movie. A pleasure to see actors sinking their teeth in and giving it their all.

Do I recommend this movie? I think so. If you are interested in the subject matter, and seeing some great acting performances, I say go for it. Just know there are some major fails as well as the good stuff.

Maybe get permission from the author, and do a whole flick on the precient’s struggle from their point of view. I’d like to see that. Black people all futuristic and scifi doing their thing. YES.

What think you? Gonna see Cloud Atlas? Already seen it? Didja like it? Didnt? Have a Dream Cast you want to talk about? Gotta cool movie idea for Futuristic Black People In Outer Space? Do SHARE :)