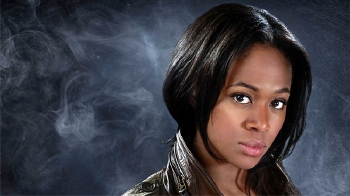 These three words are not often seen or heard, and what they symbolize is also very rare: Black Female Lead.

When you hear those words the first thing that might spring to mind is Olivia Pope played by Kerry Washington on the smash hit Scandal. You might be hard pressed to come up with any others. How about Joanna Locasto played by Meagan Good in the now cancelled show Deception? Or maybe in a pinch you could sort of add in Lacey Porter played by Kylie Bunbury in Twisted, co-lead with two other actors.

Today I give you Abbie Mills played by Nicole Beharie (pictured above) starring in the lead role in the new TV Series Sleepy Hollow. So far there are only two episodes, and I’ve watched them both. I am trying not to get too invested in this show, because if you’ve been paying any attention, in those rare instances that a Black woman is cast as the leading role in a television series, her position is a precarious one.

Take Deception for example. From the promotional ads to the writing for her character and more, Meagan Good was consistently being sidelined and basically treated like a bit player in the series she was starring in. Despite that, she has Lead Role in a television series on her resume, and I wish her well in all her next endeavors.

I read somewhere that the three main characters in Twisted were supposed to be a triple-lead sort of thing. But the inevitable happened – pretty quickly – and everything ended up positioned to be from the point of view of the white female actor of that trio.

You might think that Kerry Washington was immune to such things, but alas, she too has suffered sidelining in promotional advertising for Scandal. In some cases, she isn’t even pictured. Or that thing that happens when you have a white male co-starring even though the Black woman is the lead…

Here’s what I mean. It is already happening with Sleepy Hollow. Understand, the Abbie Mills character is the STAR of the show. She is the LEAD. But look at this poster right here: 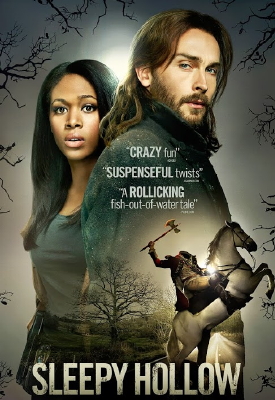 If you want to see more of that feel free to Google the other shows I mentioned and take a look at their promotional ads and posters. Here’s another one where the star of the show isn’t even there: 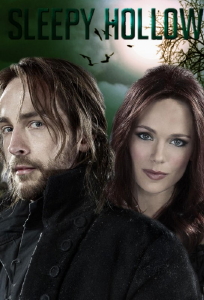 Let’s talk fandom shall we? If you haven’t been living under a rock, or just simply DON’T KNOW, a lot of white people, fans of shows/movies go absolutely batshitCRAY when a POC shows up cast in what they think is a “white role”.  Lemme refresh your memory…

1. Guinevere cast with a Black woman on Merlin

2. A Black man cast as Heimdall in Thor

3. Rue as a little Black girl in The Hunger Games (tho that was faithful to how she was written in the books. Some people can’t READ I guess ROFL) – There was also objections to Lenny Kravitz as Cinna

4. The very idea that a Black guy might possibly be considered to maybe someday play Spiderman sent some into apoplectic fits.

5. The Uhura/Spock relationship in the Star Trek reboot.

There’s others, but those are the ones that I can remember off the top of my head right now. I’ll briefly cover how some of the fandom commentary goes. Aside from nakedly racist ones, I mean. Here are some code words and phrases that always pop up in these cases:

“S/he is such a horrible actor”.

“There is no chemistry between (POC actor and white love interest)”.

“She’s so ugly.” (used very often especially when the hot white male character(s) are written to be smitten by the ((equally hot btw)) Black female character).

And it’s not always white people that have issues. Take a gander at THIS RIGHT HERE. Yep.

He would rather have poor Ichabod stay faithful to his centuries dead wife – no matter that she pops up in ghost form in his dreams every now and then – then have any interest in the living, breathing, beautiful Black woman he spends all his time with.

Not to mention his “hate” includes Abbie’s sister Jenny Mills – played by Lyndie Greenwood –  who at this point was onscreen for barely 3 minutes at the tail end of episode two. So much malice for a character we’ve barely seen or even gotten to know yet!

I say go ahead and watch Sleepy Hollow, if you haven’t checked it out already. I think you can catch epis on hulu or search the net for other places to get caught up in time for the next installment. And hope and Pray with me that they don’t eff it up!

Just a blurb on Marvel’s Agents of the S.H.I.E.L.D. which also kicked off recently. I wasn’t going to watch it because Yet Again there were no Black women cast. There are a few WOC yes, including Ming-Na Wen, Ruth Negga and Chloe Bennet but no chocolate-hued women were cast.

There are of course, at least in the pilot I ended up watching, a few of Black males in supporting and what I read to be re-occurring roles, but again, Black women forgotten. It is a usual thing where a Black male is used as the default for the inclusion of Black people. I also notice that tends to happen a LOT in sci-fi.

I will probably continue watching, but chalk it up under my usual heading I employ in these instances: Watch Because I Love The Genre But Understand You Will Not Be Seeing Yourself On The Screen. I’ll take the hit and watch anyway because it is right up my alley. But still… Oh Well.

And lastly, I just wanted to give a shout out to Naomie Harris who was cast as Eve Moneypenny in the third installment of the James Bond reboot Skyfall. 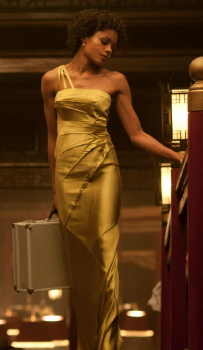 With her gorgeous chocolate skin tones, natural hair, style, grace, beauty and Secret Agent Toughness, I was in absolute heaven.

I will also note that of all the women Daniel Craig had been paired up with or interacted with so far – and that includes all three films – the chemistry between him and Naomie wins hands down. Which is interesting, because the nature of their relationship is a platonic one.

Back in the day we called that “Sparkage”. It is a thing that happens that can’t be faked, and it shows up on your screen unmistakably. Like that thing happening between Avan Jogia and Kylie Bunbury on Twisted. Or the extreme sparkage that threw down with John Cho and Gabrielle Union on FlashForward.

And speaking of John Cho… Oh YES he IS indeed cast in Sleepy Hollow. One more reason to go on and Get Ta Watchin!

Recommended: The Black Girls Club brought to you by the Amazing Ankhesen Mie.

MovieMagic happens when you do it! So show creators, movie makers, casting people: Get With The Program Already!

Stuff is so much more AWESOME when Black women abound. Don’t be left in the dust as the Paradigm Shifts.