My Dream for Ferguson on No Indictment Day

I’d like to see the Ferguson protesters and pretty much all the other cities and counties that have joined them in solidarity adopt what I call Operation Tumbleweed (or not really a hashtag ((yet)) #BoycottThePolice). This is just a dream I have. I know that it won’t happen because there’s already THIS: National Ferguson Response Network – but hear me out anyway.

We’ve all seen and heard the reports of the Ferguson and St. Louis police departments gearing up for the response to what looks like to be a given – that Darren Wilson will not be indicted. I’ve seen members of the military aghast at the prep – oodles of grenades, tons of wooden and rubber bullets, batons, plastic restraint bands, armored vehicles, weapons, tear gas, mace, pepper spray, armored gear – you name it, they’ve got it all stockpiled and ready to be deployed on… peaceful protesters. I kid you not.

So they’ve obviously been spending money like crazy with all of this – they have been from the get go – I can never forget that one night when they had blocked off the streets, and were following the singing, chanting and marching peaceful protesters up and down the streets of Ferguson with a phalanx of cars, jeeps, vans and paddy wagons. All pristine, and brand spanking new. It was absolutely ridiculous to behold.

So I say make them look doubly foolish. Everyone stay home on No Indictment Day. Or no Indictment Night – whenever they are going to give the announcement. Protesters can gather in homes, local churches, community centers – anywhere but out on the streets. Shame em with a complete new game plan that flips the script on em and shows the world just how completely asinine the police departments, city and federal law enforcement really are.

All dressed up and nobody showed up to the party.

Everyone is ELSEWHERE. Let them roll up and down the streets in their armored vehicles, dressed to the nines in military camo and riot gear, with all their weapons and canisters of tear gas.

I would love to see the deserted streets of America on that day.

The only foot traffic the hordes of law enforcement milling around in confusion. Maaaaan listen. That would rock my world and make me just point and laugh and cackle for three days straight. Everybody gathered in solidarity not on the streets, but in their homes, in their community centers, in their places of worship. 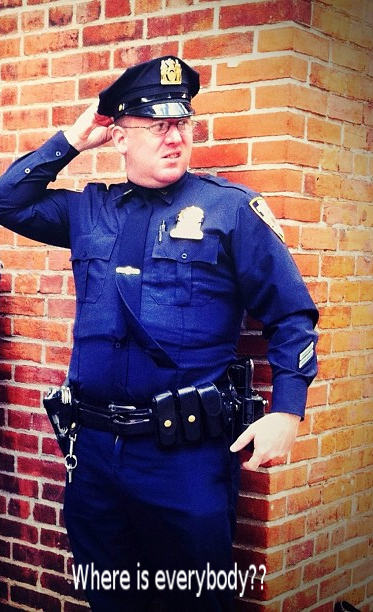 Don’t get me wrong. I’m not being flippant about this completely serious issue. I would absolutely in all seriousness love to see this happen. It would be a win on so many levels. The media would have nothing to spin. The police departments would have to account for near-bankrupting their budgets in amassing all that gear for “the race war” or whatever they thought was going to pop off.

Protesters would still be able to gather in SAFETY and solidarity and as per usual get their message out via twitter, vine, instagram, podcasters and live-streamers who will be attending the indoor events at Ferguson and all over the country. Doing what they have already been doing for the past nearly 100 days.

I worry for the protesters in Ferguson. I know people are going to get hurt. All the police have ever done is escalate things. Their response to a peaceful candle light vigil, where mourners were gathered in the name of Mike Brown is what set this whole thing off. They are not interested in abiding by the laws, rules and regulations of their own police departments much less adhering to the constitution of the United States.

How do I know this? We’ve seen it in their behavior. They’ve refused to wear their full uniforms – no badges or name tags, they sport support for Darren Wilson wrist bands instead. They enact unconstitutional policies and rules and consistently trample on the civil and constitutional rights of the American citizens gathered to protest. If you have no idea what I’m referring to Read This Post and all the links therein. Get caught up.

As I write this groups from Ferguson, Chicago and other states in this nation and civil rights orgs have been meeting at the UN in Geneva yesterday and today – and are doing a silent protest right now. It is particularly telling that the U.S. delegation sent to respond had not one person of color. See #FergusonToGeneva hashtag on twitter and/or follow @Ferguson_Geneva for more information. End police brutality and the killing of Black and brown children, women and men by the police.

I say Ghost Town it. Operation Tumbleweed. Flip the script. Empty the streets. Gather in safety and solidarity. Turn the tables. Shine the spotlight on the ridiculousness and harshness of the response to Americans simply exercising their rights. Show the world who exactly the violent thugs really are.

I have a dream. For empty streets on No Indictment Night.

And if by some miracle they do indeed #ArrestDarrenWilson I say gather indoors anyway. The “law enforcers” will be hurting and spoiling for a fight.

Whatever happens. Be safe out there. My prayers go with you all. #Ferguson #JusticeForMikeBrown

17 Responses to My Dream for Ferguson on No Indictment Day